The Highs and Lows of Standing Desks 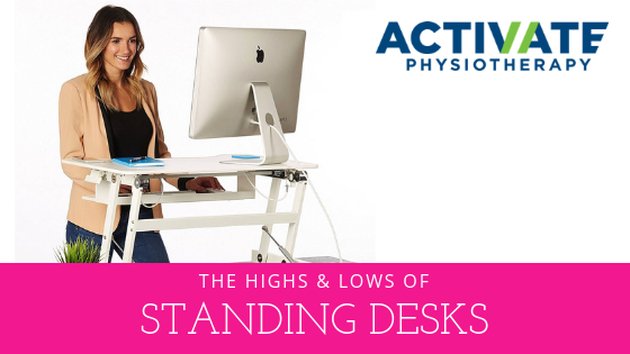 Sit-stand desks have been around for a little while now are becoming increasingly popular in the workplace.

The major benefits of a sit-stand desk are that they provide you with postural variety. Sit-stand desks have been associated with a decrease in musculoskeletal complaints, enhanced cognitive performance and a considerable impact on cardiovascular disease and type 2 diabetes.

FOR THOSE WHO LOVE COLD HARD FACTS

Both standing and taking breaks from sitting are beneficial for your physical health. Standing increases caloric expenditure by about 30% over sitting which may have a positive impact on weight, blood pressure, blood sugar and cholesterol levels, while taking regular breaks from sitting (altering posture, standing up, stretching, etc.) has been shown to reduce musculoskeletal discomfort, reduce fatigue and stiffness, and increase blood flow all of which may reduce the risk of musculoskeletal injury.

If you’re wanting to work out the ROI on a standing desk your research may uncover a recent study from Texas A&M University which found that employees who used sit-stand desks were 46% more productive than those at traditional desks. Major news media ran with the eye-catching stat, and readers gobbled up the information, believing they, too, could be wildly more productive if only they had the right desk. Who wouldn’t want to be more productive by putting in so little extra effort?

BUT… BECAUSE THERE’S ALWAYS A BUT

An even more recent review of studies from this year found that sit-stand desks had “no considerable effect” on performance. They also didn’t significantly affect the amount of sick time employees took, which is often included in productivity measures. 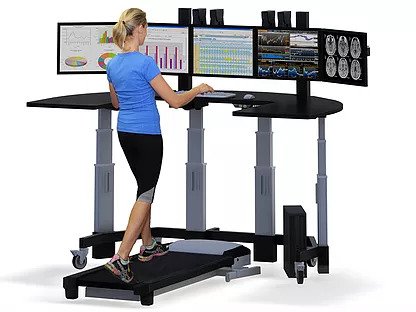 Additionally, standing workstations or those with too many fancy attachments, such as treadmills or bikes may provide additional tasks that distract from the primary work-based task and actually decrease productivity levels or lead to an increased rate of musculoskeletal injury.

While productivity may not be directly linked to standing workstations it may be influenced indirectly which may explain their popularity with workers.

A MATTER OF MORALE

Sit-stand desks might make workers happier. They could even ease some of the pains associated with sitting for extended periods of time. But they aren’t going to magically make anyone more productive.

NOT A MAGICAL CURE

Standing for prolonged periods of time has its own problems, including increased joint pain, swelling, restricted blood flow, stiffness, and fatigue,” he said. In other words, we have to find the right balance of both sitting and standing.

Similar to sitting, standing for too long can also lead to workers adopting lazy or poor positions which may increase stress or strain on different parts of the body. For example you may tend to lean more onto one leg, pushing your hip out to the side and placing more weight through one side of your spine, hip, knee and foot.

SO WHAT’S THE OPTIMAL LENGTH OF TIME TO USE A STANDING DESK?

As the age old saying goes, “too much of a good thing can be a bad thing.” Whilst there are benefits to using a standing workstation the key issue appears to be finding the optimal balance between sitting and standing time. Experts agree the ideal length of standing time is approximately 25 to 33% of your desk bound time (Husemann et al. 2009). This should ideally be spread across a single hour. Therefore, you would stand for approximately 15-20 minutes and then sit for 40-45 minutes.

However, everyone is different and quite often just having the choice to change your working position can influence musculoskeletal complaints. Therefore, this should just be used as guide and people should modify their usage according to their personal preference.

Still confused or need help with your workstation setup? We can help!

Contact us via email or phone our Gumdale or Stafford clinic.