How did Cooper Cronk play the NRL Grand Final with a broken shoulder? 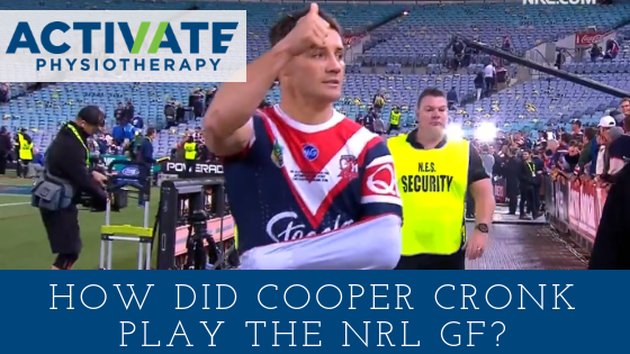 In case you’ve been under a rock, last weekend Cooper Cronk played in the NRL grandfinal with a knowingly broken shoulder blade – Amazing or just plain crazy? Let’s take a look.

Firstly what is a shoulder blade fracture? 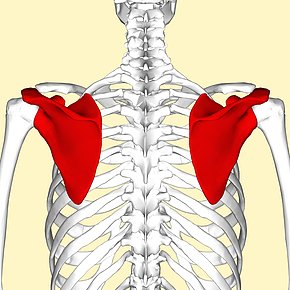 The shoulder blade, or scapula, as it is more correctly known is the bone that connects the humerus (upper arm bone) with the clavicle (collar bone). It is triangle shaped and looks like 2 little wings on either side of your upper back.

Although it can be paper thin in parts (it is actually see-through! I know this from checking it out back in my uni days in anatomy class) it is well protected. It lays underneath bulky muscles of the upper back and shoulder and is guarded by the ribs on it’s front surface.

This means the scapula is quite hard, although not impossible, to fracture in every day life.

Scapular fractures are known as car crash fractures as high speed motor vehicles are the most common cause. But bike crashes, falls and direct blows to the area can also cause the shoulder blade to fracture – enter Cooper Cronk.

Cooper’s injury occurred due to a blow to the back in the preliminary final against the Rabbitohs. Reports right up until the end of the grand final game said Cooper had a rotator cuff injury and his shoulder function was around 30%. Anyone who watched the game would know the Roosters played with 12 players and an on field coach as he made a valiant effort to steer the team to victory.

BUT HOW DID HE DO IT? 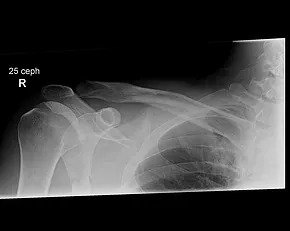 Bravery yes… and a lot of help from the medical and physio team from the Roosters.

Cooper’s fracture was (later) reported to be a 15cm break across the middle of the shoulder blade (we’re taking a little poetic licence with the xray which is 100% not Cooper Cronk’s scan).

A recent NRL.com article describes how the medical team went from him being completely ruled out of the game to playing almost the full 80 minutes.

The medical team decided there was little chance of making the injury significantly worse but pain was the issue. With the pain Cooper was experiencing he couldn’t pass let alone make or take a tackle. As well as Cooper’s dedication to 5hours of physio a day if needed (in an interview he said he’d do 10hours if that’s what it took) the doctors successfully trialed injections of anaesthetic to the fracture to block the pain. They knew they could only give him a limited dosage so it wouldn’t cause other complications (like causing his heart to go into a funny rhythm – never a good thing) so had to go as far as getting a doctor to bring his ultrasound machine to the dressing sheds for pinpoint accurate injections pre-game and at half time.

So that’s how he did it – not your standard rehab.

So how is a scapular fracture usually treated?

While we don’t recommend the average person go and play a footy grand final with a broken shoulder blade, most scapular fractures are managed without surgery (unless they are very misaligned).

For us mere mortals treatment involves pain medication and immobilization at first; later, physiotherapy is used. Ice can also be used over the affected area for some local relief.

Physiotherapy will focus on maintaining or restoring movement with exercises as early possible. It’s quite safe to do this with scapular fractures as around 90% of cases are not significantly displaced and even those that heal with a little displacement generally don’t impact on function.

However, displaced fractures in the scapular processes or in the glenoid (shoulder socket) may interfere with movement if they are not realigned properly, so these cases are the ones that more commonly result in surgery. These will still require physio after surgery and take a little longer to recover.