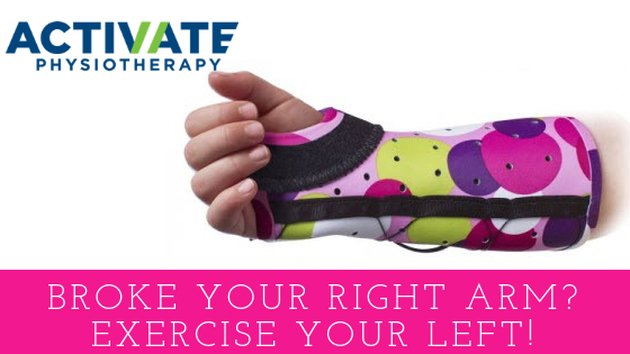 You’ve broken your arm or leg so there’s nothing to do now but play the waiting game. Right? Wrong!

New evidence is out showing people immobilised for fractures benefit from performing exercising their other limb.

You heard me exercising the non-injured arm or leg can help to preserve muscle strength and size during periods of immobilisation, like being in a cast for a fracture.

Why does it matter?

For anyone unfortunate enough to have broken a bone and had to wear a cast or boot for a number of weeks, you’ll be all too familiar with the weedy appearance of your limb when you’re allowed to take it off. Your injured arm of leg can loose an alarming amount of muscle bulk and strength when it is prevented from being used. This is a phenomenon called muscle atrophy and for a long time there’s been no way to avoid it.

The weakness combined with joint stiffness is what we as physios will work on improving once your allowed to take your cast or walker off and it can be months before your movement, strength, coordination and balance return to normal.

So it’s great news that some of the detrimental effects of immobilising a fracture might be overcome by exercising the opposite limb.

How do we know this works?

A study published earlier this year in the Journal of Applied Physiology studied a group who had to wear casts on their arm for 4 weeks. Before and after wearing the cast they measured the strength and muscle bulk of the immobilised arm. They made half of the group rest and the other half do exercises to strengthen the muscles of the forearm but only on the arm that was not wearing the cast. What they found was that the people who rested lost an average of 20% of their strength and 3% of their muscle size. The group who exercised their other arm managed to preserve both the muscle size and strength.

How does it work?

Ok time to science up! 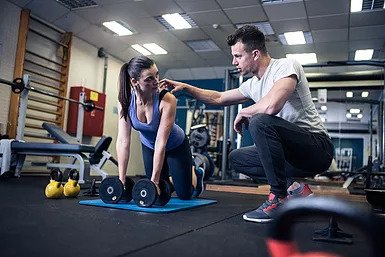 We do not fully understand what causes the effect but it’s certainly very exciting. There is previous research showing a similar effects but mainly in people with neurological disorders such as stroke or spinal cord injuries. This is the first study for fractures.

If we use the theories from these neurological studies they believe the strength and size preservation might be due to small contractions, known as “mirror” contractions, that occur under the cast while training the opposite side. They measured these contractions and they were present but are really small and probably not big enough to preserve the muscle.

Another theory points towards changes in the nervous system relating to how the left and right sides sides of your brain share information, meaning that training causes adaptions on both sides of the brain. We know from strength training research that many of the initial changes from weight training occur in the nervous system as your body gets better at recruiting the muscle that is already there. So this explains the strength preservation but not how the size of the muscle remains.

So – in summary you NEED to train the other limb

We might need more research to explain the results but it is quite clear that training the other limb can certainly lessen the impact of being immobilised in a cast or walker/moon boot.

it is quite safe to do under the guidance of a health professional who understands how to target the specific muscles prone to weakening or atrophy as the study found that the strength and bulk was only maintained in the specific muscles trained. So unfortuantely a global approach of just using your arm or leg won’t cut it.

The physios in our Fracture Clinic can assist to assess, treat and rehabilitate your injuries or fractures. We offer same day appointments for bulk billed xrays and fracture fixation using our EXOS casts or CAM Walker/Moonboots. No referral is necessary and YES we can remove your old plaster or fibreglass cast.