Kyphosis. Lordosis. Scoliosis. It’s all a bit complicated. What’s the best type of posture to have and what can you do if your posture isn’t ideal?

If you want to know what optimal posture should look like, start by looking at young children. From the side their spine takes on a subtle S shape. As we get older, bad habits such as slouching and inactivity cause muscle fatigue and tension that ultimately lead to poor posture. The complications of poor posture include back pain, spinal dysfunction, joint degeneration, rounded shoulders and a the appearance of a bulging belly. 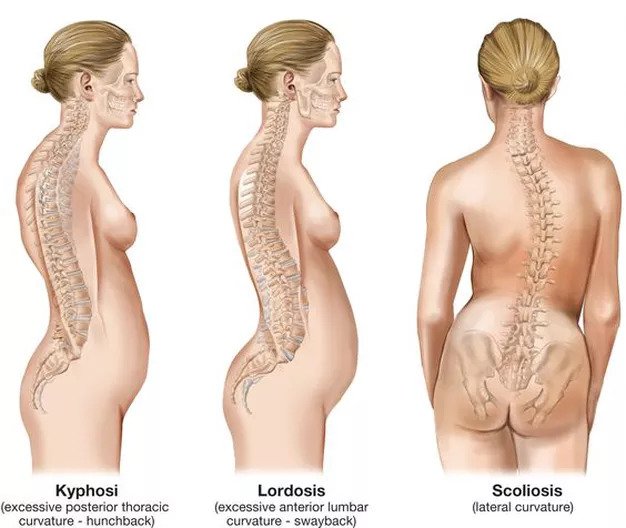 Kyphosis is sometimes referred to as hunchback. It is characterised by excessive curvature of thoracic spine or upper back. People with kyphosis will have rounded shoulders with higher muscles in the front of the shoulder and chest and weaker muscles in the back. They often have a pronounced bump on the back of their neck where it meets their shoulders and their head cranes forward which may lead to neck pain and headaches.

Many people call lordosis the sway back position. It is characterised by a large scooping curve of the lumbar spine or lower back. People with lordosis generally have and tight muscles in the front of their legs, the hip flexors. They also have weak core and abdominal muscles which leads to the potbelly appearance of their stomach as well as weaker gluteal muscles, even though their bottoms might look big it’s because of the forward tilted position of their pelvis.

Often more than one of these posture types will be present at one time. The most common is a kypho-lordosis, a combination of rounded shoulders and sway back. Clinically this is a particularly common posture type for adolescent females.

There are many myths about the causes of scoliosis. Scoliosis Australia says this posture type is not a true postural problem like kyphosis or lordosis and is not caused or made worse by allowing the body’s muscles to become weakened or tightened. Exercises can be used to help to manage symptoms and in some cases a brace or surgery may be required.

While some determinants of posture are genetic, there are many things people can do to help to manage their posture in order to optimise it.

The key is to strengthen the muscles that are weak and loosen or stretch out the muscles that have become shortened or tight. Physiotherapists can prescribe a series of exercises, including Pilates style exercises which can be continued at home in order to get the best response.

As well as exercises, people with sub-optimal posture should avoid things that exacerbate their posture type. Carrying heavy bags and backpacks, sitting in soft lounges and chairs without good back support, slouching or standing heavily on one leg and prolonged periods at the computer can all exacerbate a kyphotic or lordotic posture.

If you’re concerned about your posture or the posture of someone you know a health professional who specialises in assessment and management of musculoskeletal disorders, such as a Physio can help to provide intervention to optimise spinal alignment and prevent the complications of poor posture.